While drawing random shapes in my sketch book I began to notice strange repetitive forms evolving. When I defined the lines, the shapes resembled people, but not exactly what could be considered a depiction of a human being. Whatever it was seemed to demand my attention. So I became quiet inside myself to let me think. 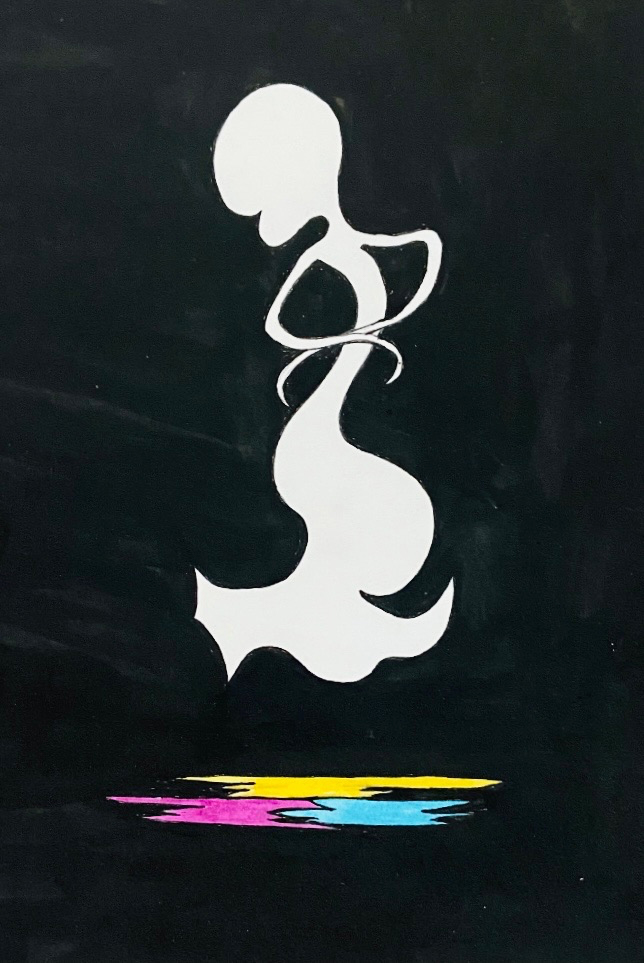 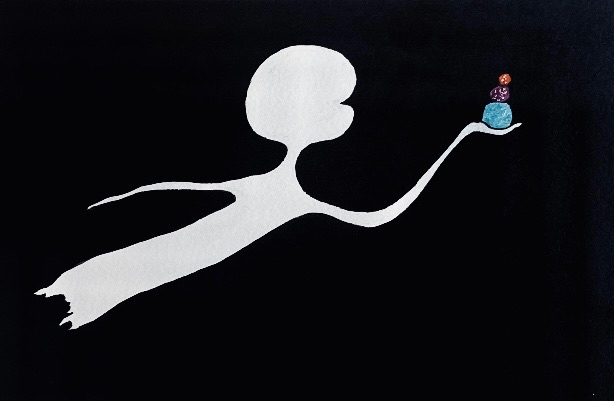 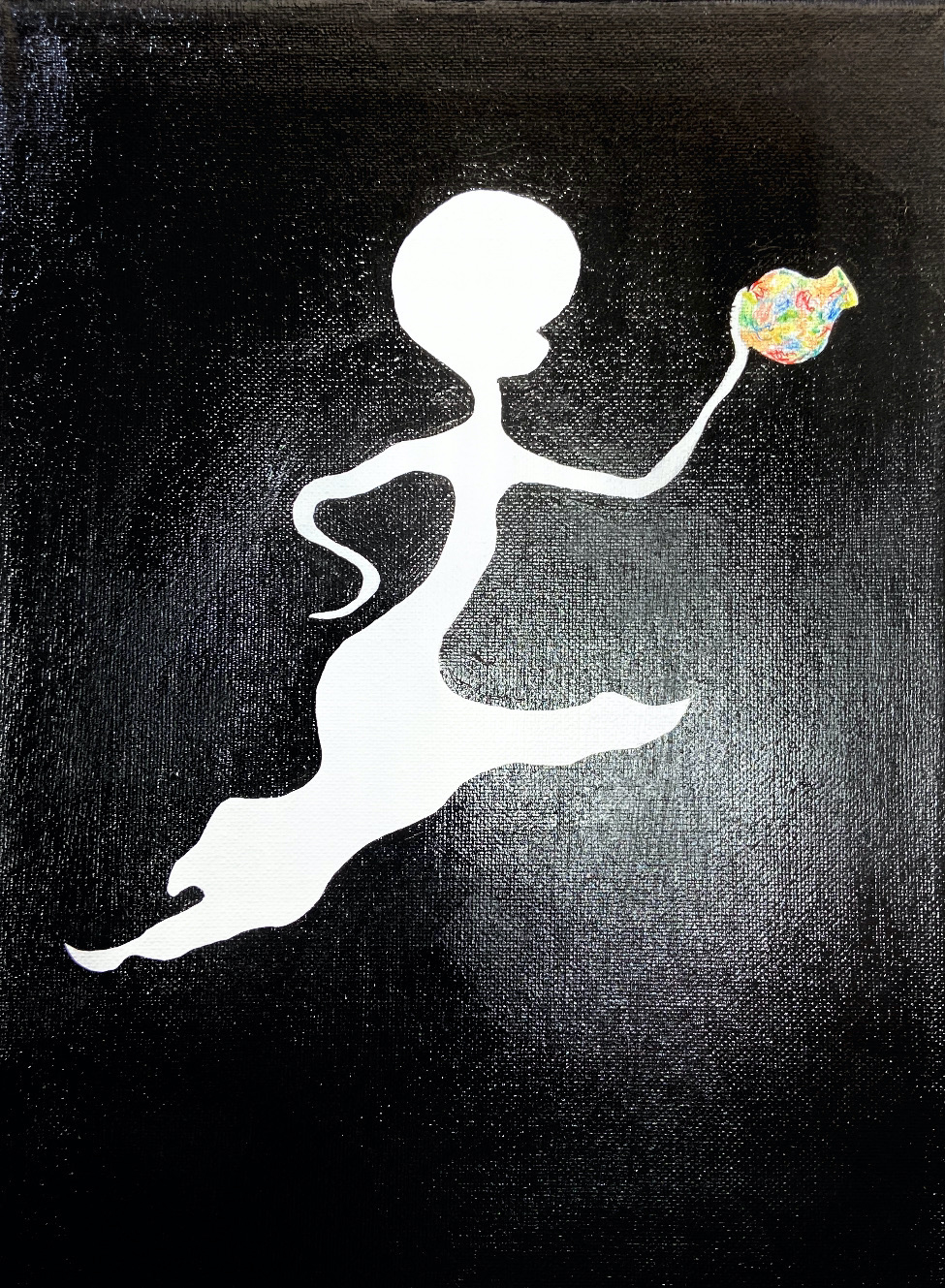 The word ”lmno” came strongly to mind. Hadn’t thought of that word for a while. This took me back to the time when I was learning to recite the alphabet in the usual singsong style of small children before they were able to actually write the letters.  I recalled my constant question. Why was a pea right in the middle of the alphabet?        It wasn’t noticeable when I was writing the letters, only when I would say them. This pea was particularly intrusive to me because it always disturbed the rhythm of the tune. I would have to pause when my song reached K. Then a description of the pea was included and had to be sung before continuing with the Q and the rest of the alphabet.   l did learn this wasn't just any ordinary pea….it was an ”lmno” pea !

Many questions bombarded my thought.

Is it likely that by only focusing on the pea I might be missing something of far greater importance?  Why was there a word, an adjective, describing or explaining the characteristics of a pea, placed in the center of those 26 symbols of my language? How did these 4 letters, when spoken, become as the sound of a word?  What if the source of these particular vibrations was a living entity from far away, patiently waiting to become noticed and have its presence on Earth acknowledged? If I could imagine an image of that entity what would it look like?

First I translated the sound of ”lmno” into English as Elamenoe. Then I began to

create a mental image that could be expressed as a visible form through my art.  After condensing the essence of an Elamenoe into a probable recognizable human form, I then added to their identity by giving them a place of origin. This endeavor was to replace thoughts about ideas, with the images of the ideas. Elamenoes are now visible as both subjective and objective realities.

Elamenoes have been passing through our Earth’s atmosphere even before humans began to develop the ability to write spoken words.  They had always wanted to develop a connection with Earthlings  A conclusion was made to insert an air vibration of their name in an obvious place (an alphabet) where a literate human, with a receptive and inquisitive nature, would someday and somehow, pause and think about that sound and its possible significance.

Imagination is the act or power of forming a mental image of something not present to the senses or never before wholly perceived in reality.

Inspiration is the process of being mentally stimulated to do or feel something, especially to do something creative: such as when a sudden brilliant, creative, or timely idea becomes a huge motivation needing to be developed more fully and just won’t let you ignore it.

I was inspired by my imagination!

The Elamenoe is from a distant planet named Elamenoe.  There are occasions when  an Earthling can perceive and feel the presence of a different reality. This happens only when they are not being limited, restricted or bound by the strict confinements of depending on their five physical senses for information. Then, a lively exchange of ideas, feelings, and perceptions can easily become mentally developed with other like minded entities from other realities.

When the Elamenoes and I are connected I can mentally sense their individual colorful expressions of peace, innocence, purity, honesty, happiness and lovingkindness. These special qualities remain totally untouched and uncontaminated by any opposing forces or influences on or around an Elamenoe.

That is why they always appeared, from my point of view, as flexible forms of gravity immune whiteness. Their entire demeanor is the merging of all the hues of our Earthly colors being reflected outward, as light. For this reason any specific colors could never individually be made evident. Black forms absorb all colors, so Elamenoe can only be fully recognized as white forms. This is why they become completely, irresistibly and sometimes excitedly fascinated by any object on our planet that has colors on it. 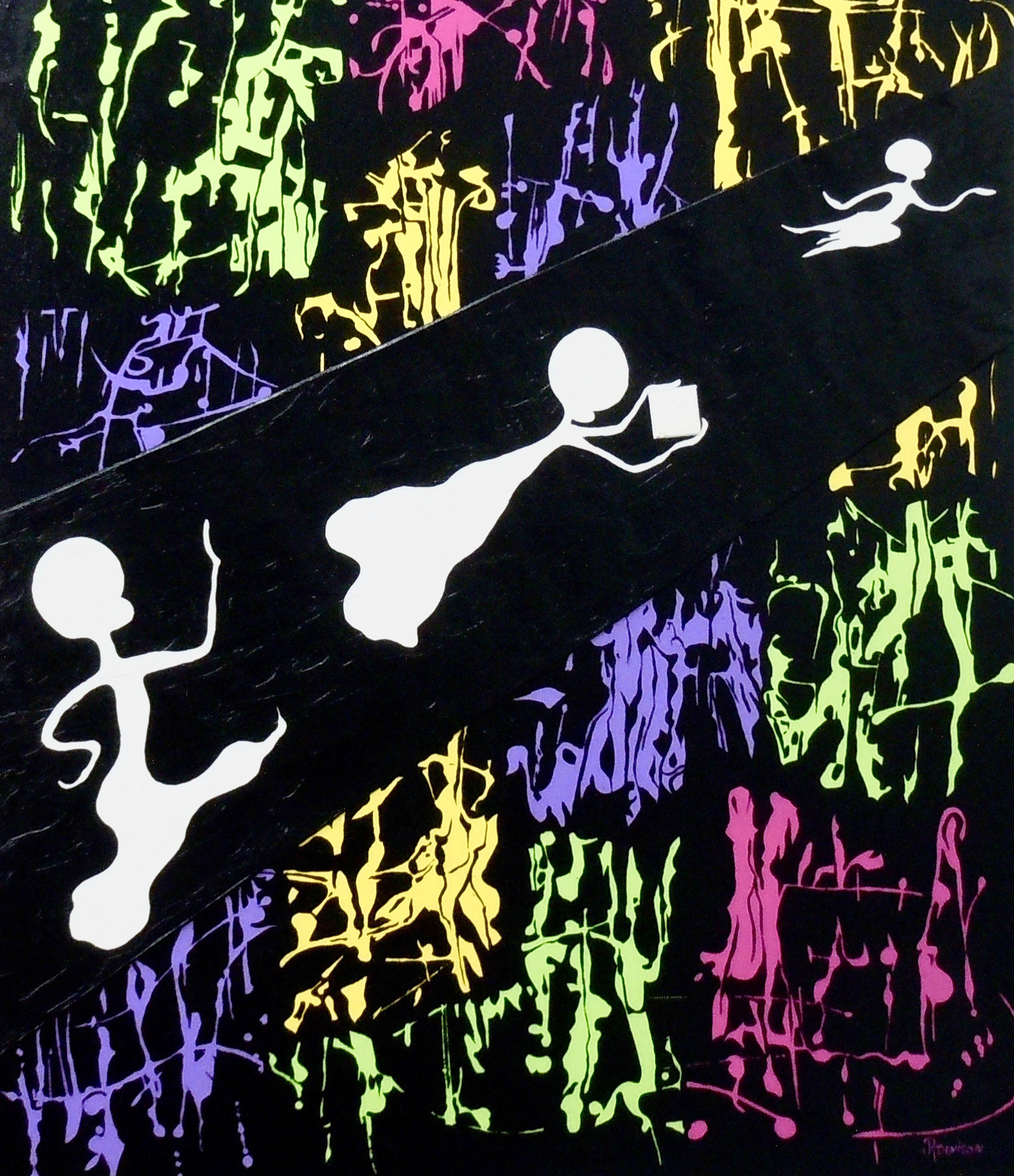 I was told that for a very long time Elamenoes had been passing through our Earth’s atmosphere. They were aware of our intermixtures of confusion and discord, love and happiness as well as our other thought processes. But they never gave any attention to us or our colors because there was no way to make any connection. Now they can share with us their fascination with what, to them, sometimes seems to be meaningless activities of Earthlings.

This painting shows elamenoes imitating earthlings they have seen being confronted with adversity. 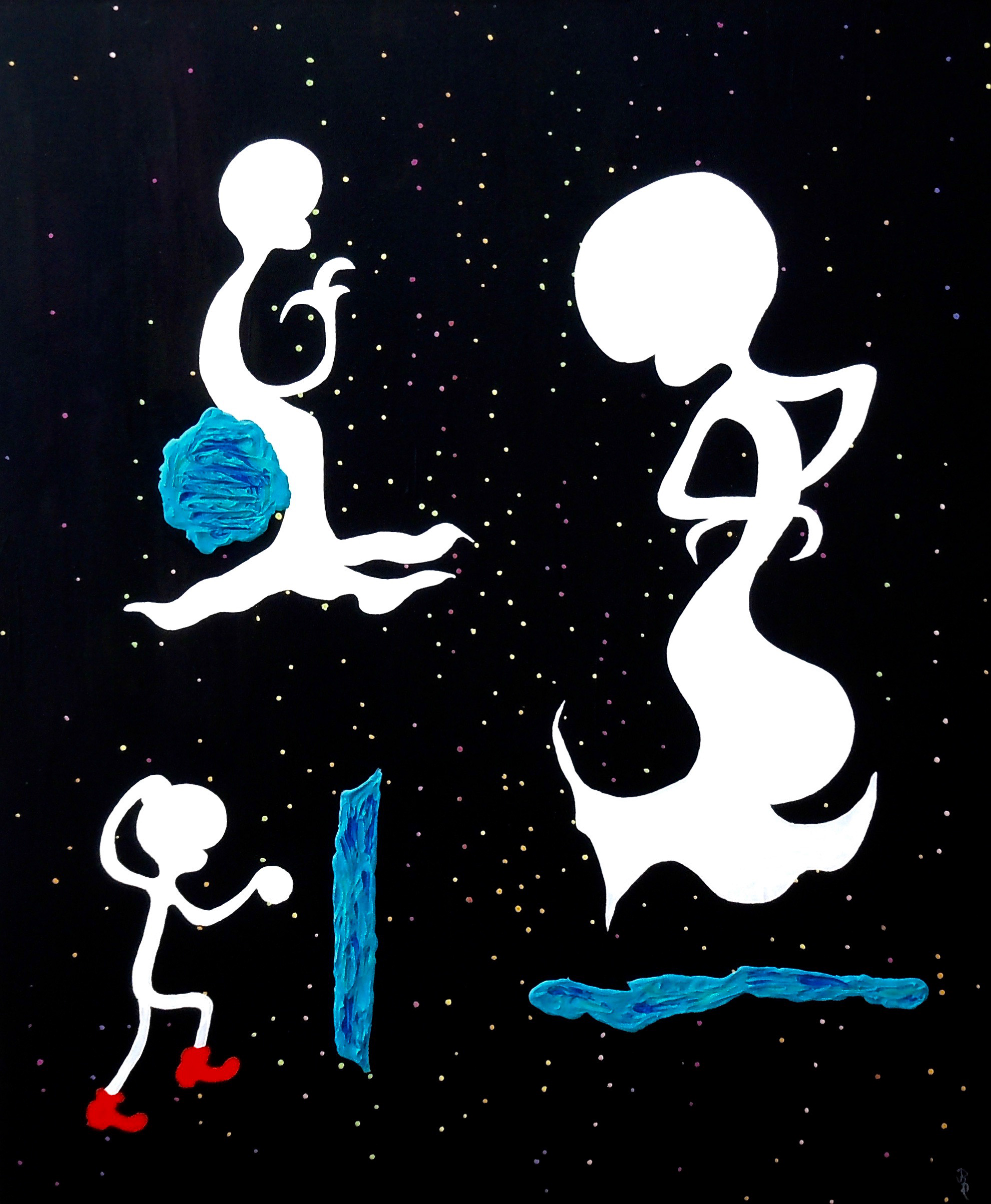 The blue textured shapes are forms of Adversity. Such as difficulty, misfortune, mishap, tragedy, distress and the like. The Earthling on the bottom left is a fighter and is continually attacking Adversity, prepared to beat it up, kick it, fight it. All of the anger and aggressive efforts accomplish nothing because a solution to Adversity has never been faced.

Above, an Earthling has rolled Adversity into a ball and is just placidly sitting on it. By putting Adversity where its presence can't be noticeable or is avoided, it will not have to be confronted. So, while completely focusing on itself these thoughts take over. ”If I had only done this or that differently I wouldn’t have to experience any Adversity.” ”I know that all of this was brought about because of the way I reacted to, whatever, and I should have been more, whatever, than I have been.” ”I deserve better than to have such Adversity in my life.” ”I should have done or been or claimed my. whatever, in a different way.” All the while the Adversity is never addressed and the Earthling eats itself into oblivion.

Then there is the happy Earthling not aware of any Adversity causing discord. It just keeps enjoying dancing above it all, care free and full of its own uncomplicated surroundings. But someday that altitude will be lost and it will come down right in the middle of the unaddressed Adversity that is still there.

Elamenoes looking at two of our "happenings"

I have become favorably impressed by the composed attitude Elamenoes always maintain as they are observing our earthly experiences. 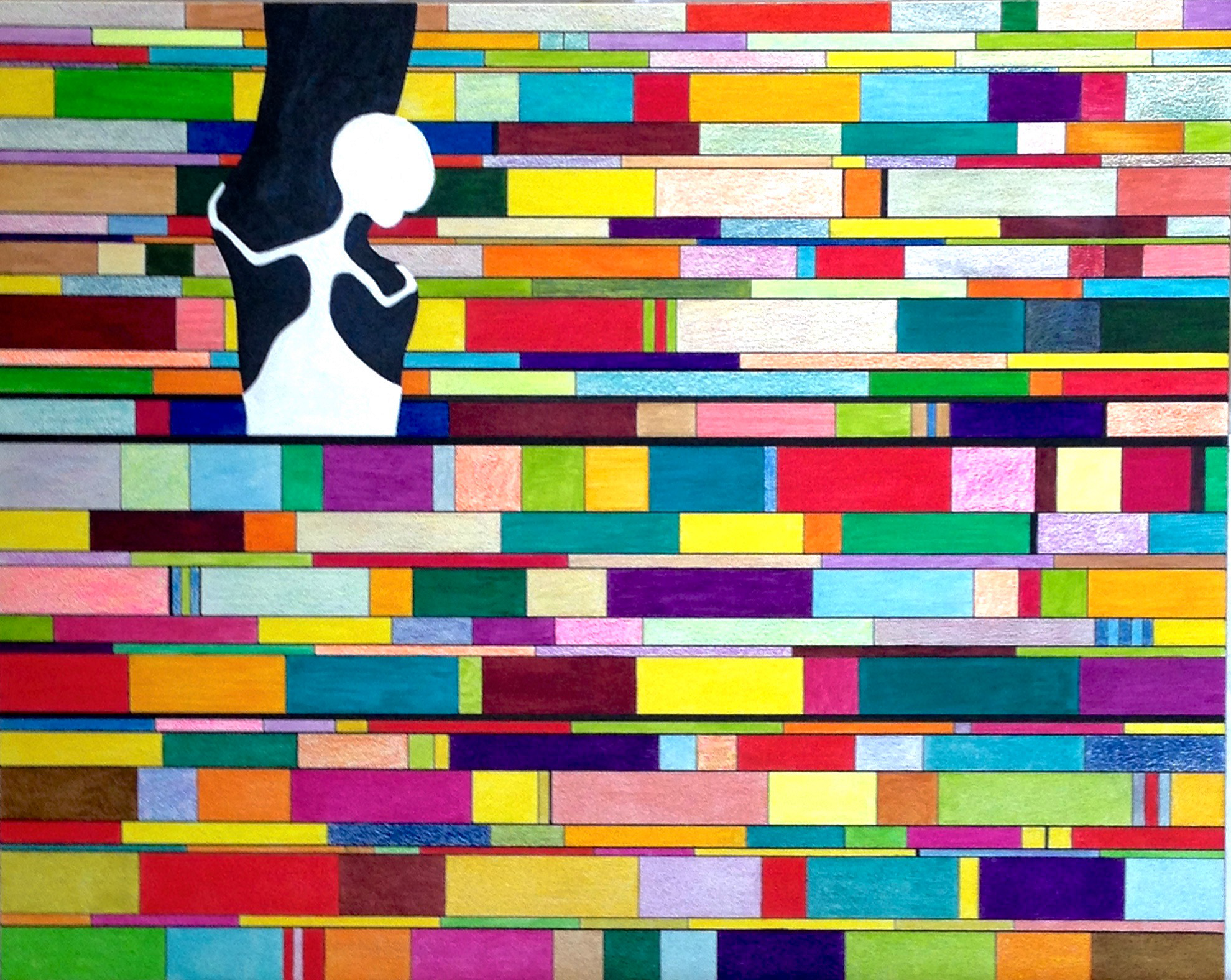 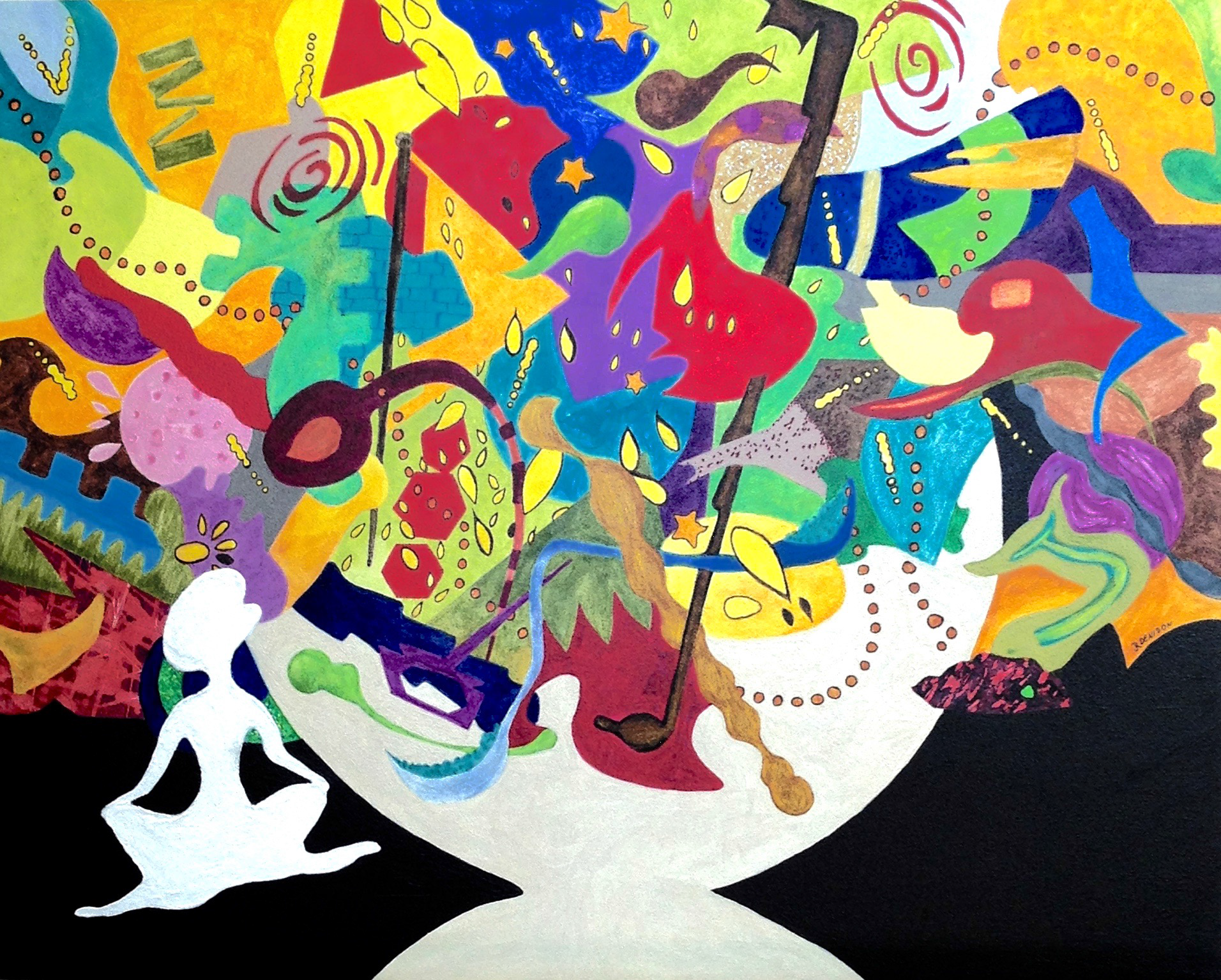 ”The task is not so much to see what no one has yet seen, but to think what nobody has yet thought about that which everybody sees.”
-  Erwin Schrodinger

”The world of reality has its limits; the world of imagination is boundless.”
-  Jean-Jacques Rousseau

”Imagination is thinking ahead.”
-  Jane Denison

”I am enough of an artist to draw freely upon my imagination. Imagination is more important than knowledge. Knowledge is limited. Imagination encircles the world.”
-  Albert Einstein

”Inspiration comes from the imagination.”
-  Gina A. Davis

”An artist who has no imagination is a mechanic.”
-  Robert Henri

”Imagination should be used, not to escape reality, but to create it.”
-  Colin Wilson

”What is now proved was once only imagination.”
-  William Blake

”The power of imagination created the illusion that my vision went much farther than the naked eye could actually see.”
-  Nelson Mandela

”Imagination will often carry us to worlds that never were. But without it we go nowhere.”
-  Carl Sagan

”But, I nearly forgot you must close your eyes, otherwise you won’t see anything.”
-  Lewis Carroll

”The world is but a canvas to the imagination.”
-  Henry David Thoreau

”The man who has no imagination has no wings.”
-  Muhammad Ali

”No idea is so outlandish that it should not be considered.”
-  Winston Churchill

”There is one thing stronger than all the arms in the world, and that is an idea whose time has come.”
-  Victor Hugo

”An idea, like a ghost, must be spoken to a little before it will explain itself.”
-  Charles Dickens

”Having imagination, it takes you an hour to write a paragraph that, if you were unimaginative, would take you only a minute. Or you might not write the paragraph at all.”
-  Franklin P. Adams

To see more you can visit my artist's page on Fine Art America.