Many artists can identify with the transformation of ideas expressed during a creative process. Usually this morphing activity occurs so rapidly that the actual procedure becomes insignificant. In this article I will share my reasoning processes as I allowed various ideas to develop and change a dot, the size of a decimal point, into a line, and then watch it move toward its final visual emergence as a finished painting.

Putting these steps in slow motion was easy because I identify with Walter Isaacson in his book about Leonardo Da Vinci,  "Leonardo enjoyed the challenge of conception more than the chore of completion."   When giving attention to the changing conceptions of creating any sense of time is considerably reduced. So it was in this case.  I was also totally engrossed in what I did NOT want to paint in deep contrast to the standard positive approach of painting something you would LIKE to paint. A sub-title for this article could be "How Not to Paint a Vase” but that title seems way too pedestrian so it stays now as it is.

THE STARTING POINT OF THIS MENTAL ADVENTURE STARTS EXACTLY THERE......AT THE POINT:

In his book ”Point and Line to Plane” Wassily Kandinsky gives detailed examples of unseen forces or voices present within any painting or drawing. He calls them the three primary Planes that are the basis for the construction of a painting. He explains the beginning of any drawing is when the pencil first touches the paper and makes its mark. In Visual Arts that Point can remain in its initial tiny round shape - as a period at the end of a sentence. When enlarged it can express this same shape by endless sizes and colors, from dots to circles, which have many uses especially in design work. It can also expand its external form by forcing out many irregular shapes while still maintaining its Point status.

For an artist the most important characteristic of the Point is when it fulfills these endless potentials and begins to extends itself outward to form what is termed a Line. A line can be straight or curved, thick or thin or all of the above and still be considered a Line.

Now we arrive at the most unique feature of the creative process. When more than one line connects with another line a "Plane" has been formed. At this stage of development a painting or drawing can now begin some fun activity using the concepts of various dimensions of the Plane, such as shapes or forms.

EXPLICATION:  My initial intention for that day in the studio was to enjoy watching the expression of some creative activity by following the flow of paint on paper along with some imagination.

On my page I first created a point or dot and then let it flow outward and upward into a Line having a pleasant contour that I visually enjoyed following.  I drew another identical line and placed the curving lines in opposing parallel positions facing each other but not touching. As usual when this proximity occurs the mind will begin to merge them together and two lines will appear to take the form of a shape. This time the mental shape looked like a vase. Being an abstract artist I certainly didn’t want to form or draw a vase with those gentle flowing lines. They needed to have the freedom to present themselves as individual lines and not be used to have a finite concrete objective existence.

How could I enjoy the lines and not have them objectify a vase? As I began to ponder what makes a vase a vase I countered each vase-like attribute making sure that it was not represented. First a vase is a vessel with an opening at its top where things can be placed inside. To stop that concept I drew a line across the top of the two vertical lines. The bottom of a vase is closed and usually flat so it can stand alone and hold liquids or objects. This visualization was eliminated by drawing a line connecting the two vertical lines at the bottom to make it appear that any perception of the form would be one of instability and could not give the impression of being able to support itself.

A vase is three dimensional. This feature was negated by drawing a shape suggesting an empty place or opening in the middle of the Plane formed by the four lines. This would establish the Plane as flat not round and remove the image of a container. Then the lonely top horizontal line asked to be able to hold something unique on it.  Heeding the request, each painting now has its own activity happening on its top horizontal line with a corresponding design in its open space. To hold the four lines together so the painting could appear as one whole non-vaselike shape I painted each one a different color in between the four linear boundaries.

Now, what was I to name this arrangement of lines?  In deference to the continuous attention I had given to a non-vase I decided that word should not be ignored. Even though the drawing was certainly not of a vase but of a non-vase. To acknowledge the foundation that word played in my conceptive processes I use those letters in the word VASE. The title of each drawing is titled a SAVE distinguished by it color. 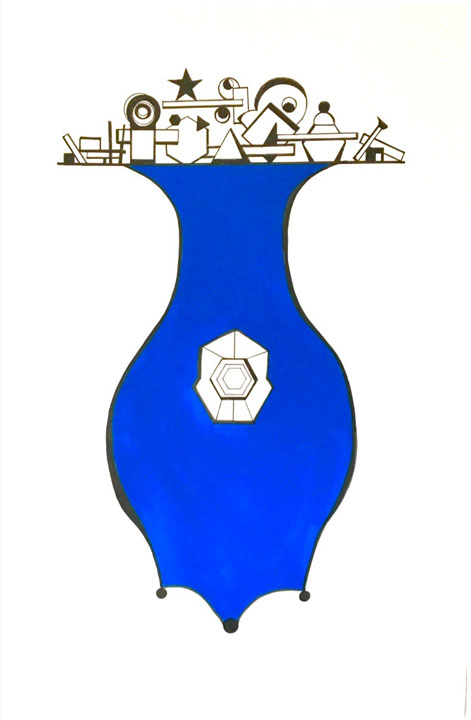 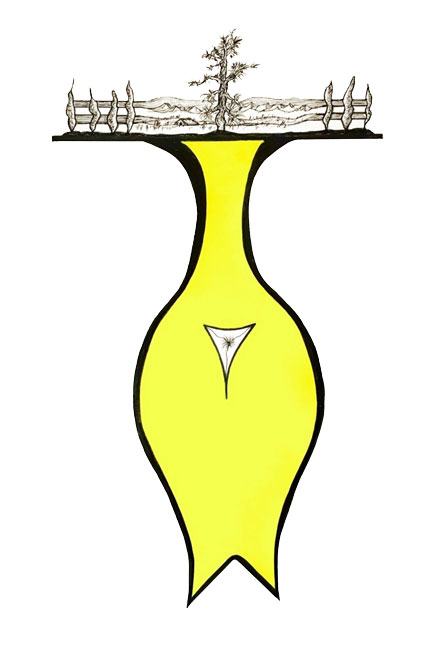 To see more you can visit my artist's page on Fine Art America.