The shapes in this painting are abstract expressions of three styles of thinking.

The black shapes in the background are thoughts depicted as inactive images showing the heaviness of cold apathy and the darkness of indifference who are barely aware of their own presence.

The orange shapes are moving thoughts bound by a propensity to remain rigid with a strong need to act like everyone else. In the manner of pendulums these thoughts swing back and forth from a common source, not wanting to appear out of place or out of pace. Their movements are obvious although they are not really going anywhere or accomplishing anything. Their monotonous routine is too often accepted as the norm.

Enter a lively free thought filled with fresh inspiration whipping out of nowhere in particular. This shape resembles a pod that contains developing original ideas. Who knows where it came from, or better, who cares. Its appearance is unusual, its direction unpredictable. One thing is certain that when inspiration begins to express itself more fully then the potential and influence of those ideas will be seen and felt.

After I completed this painting I accepted it as a finished piece, and named it INSPIRATION. I enjoyed its message for many weeks as I identified with the pod. Then I began to relate back to my own experiences with inspiration and I realized there was a another painting waiting to be painted. I knew that little pod would continue to grow and expand as it gathered more fresh ideas. Inspiration does that.

Given a ‘free reign’ ideas will mature, gathering energy sometimes from within themselves or from each other or from other sources of inspiration coming into the artists atmosphere of inspiring thoughts.

At times a creative impetus will compel an artist to paint, dance, write, sing, compose, arrange flowers or find a fresh spiritual insight. This is the time for those ideas to be expressed in ways that only that individual thinker can express them. Those original expressions of ideas are ready to be released out into the world for others to enjoy, benefit from and perhaps also feel inspired. The other painting began. 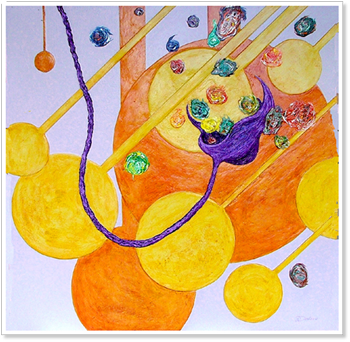 The little pod of inspiration did develop and ripen until its creative ideas freely burst forth into the world.  Like so many outpourings of creative seeds that swarm from an artist when inspired there are still choices to be made. Which ones to develop, which ones should you go back to later or discard for now?

The background shapes in both paintings are identical. Only their colors have changed.  The effect these creative expressions had on its surroundings can be seen by how its very presence acted as a light that brightened its entire environment.

Also in this fresh light of the inspired thought, the dark orange shapes in the first painting are brightly reflecting light as they collectively swing back and forth.  Because of this clearer perception of themselves and their environment it is possible for them to begin to look around with a more expansive view of what has just occurred and perhaps break away from the rigid uninspired existence they have always known and accepted.
d inactivity. They can no longer be overlooked and are able to be recognized and accept themselves as being part of a complete world picture even while continuing to express their static existence. Or in this new light they could begin to express more life and movement because the newfound expression of their vivid original color is more apparent.

What is true about inspired creative ideas is also true about the individual artist nourishing his inspiring thoughts. Every thinking person can realize they too have the ability to see and become part of a freer, unfettered expression of themselves and of their world by giving attention to the enlightened ideas coming from within their own conscious awareness of their existence.

At times we find dark views of discord, confusion, conflict, hate, etc. motivating our inspired impulses. With any idea you are inspired to express openly you should give very serious attention to just what effect or influence your thoughts will have on others both individually as well as collectively.